HMI enjoyed a field trip to the UF Ordway-Swisher biological station just south of Melrose, east of SR 21 and south of SR100.

Richard (Dick) Franz is a UF Emeritus Associate Scientist and hosted the wonderful historical tour of the 9,370 acre research property.

The tour included a stop at the pre-Civil War Fennell homestead near Ashley Lake. Settlers from South Carolina and Georgia came to the area and since they left sandhill regions, they were pre-adapted for living and farming southeast of Melrose.

On the preserve is the historic Wall family cemetery which is a stone’s throw from the Shiloh feed store on SR26.

The old county road between Palatka and Gainesville runs through the Ordway-Swisher property on a natural, high ridge between Tucker Lake and other lakes, ponds, prairies, and swamps. Just a one-lane dirt path that preceded SR26 and 100. Timmons Creek flows between Ashley Lake and Tucker Lake and was once the site of a retail store.

Dick provided countless funny stories about his years on the preserve. One humorous research story includes putting radio-tracking devices on wildlife to study their activities. Ordway-Swisher researchers put a tracking device on an opossum and later tracked the collar to a fire pit near Cue Lake…just the collar was found because the opossum was someone’s meal! Tracking devices have also been inserted in Eastern Diamondback rattlesnakes on the property.

The Ordway-Swisher preserve also has the remains of a grass air strip used for illicit drug activity up until the 1980s.

The pictures include Piney Lodge on Smith Lake, built by the Swisher family and their Ohio friends in 1933. Swisher also constructed a large bomb shelter during the Cold War but now it’s a bat shelter, hosting thousands of bats.

HMI is sincerely thankful for the great tour by Dick Franz and the UF Ordway-Swisher staff!

Click on   https://ordway-swisher.ufl.edu/CulturalResources.aspx to read the rich history at Ordway-Swisher. 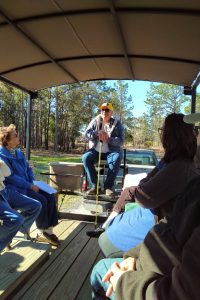 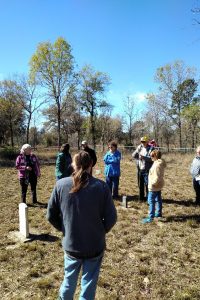 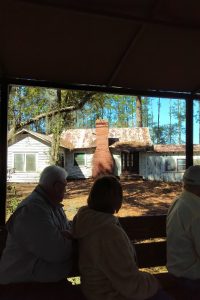 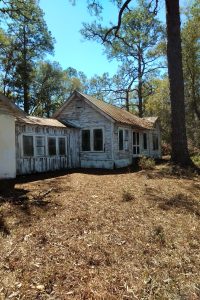 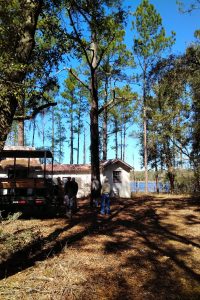